April 21, 2018 / Reflections Blog / Comments Off on Elements of Influence 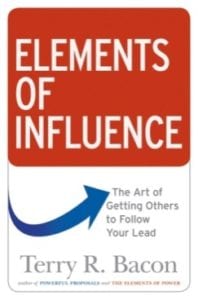 Elements of Influence:  The Art of Getting Others to Follow Your Lead is a companion to The Elements of Power.  The power book explores the eleven sources of power people have:  how they build these power sources and how they can lose power.  Elements of Influence describes how people exercise power and use various ethical techniques to lead and influence others.

Research shows that there are ten positive influence techniques—ten ethical ways you can get others to take your lead, to believe something you want them to believe, think in a way you want them to think, or do something you want them to do.  Influence is not some magic power only a few people have.  Every person on the planet exercises influence all the time.  Influence is part of nearly every communication.  It occurs in virtually every human interaction.  It is so fundamental to leadership that there could be no leadership without it.

Until recently, it was common for leaders to influence with authority, but with the rise of knowledge workers, people are more resistant to such command-and-control methods.  Today, most of a leader’s work is done through influence rather than authority, through collaborative rather than coercive methods, by inspiring commitment rather than demanding compliance.

Elements of Influence is packed with examples, stories, and practical tips for learning how to be a more effective leader through influence.  Along with the ten ethical influence techniques, I describe four negative or unethical techniques, including manipulating, intimidating, and threatening.  These techniques also work, but they damage or destroy the relationship between the influencer and the influencee.  Finally, the book includes my influence effectiveness self-test, a simple questionnaire for exploring how effectively you use the ten techniques of influence (you can also find this self-test on this web site).

Together, The Elements of Power and Elements of Influence offer a comprehensive way to understand how people build power and how they use that power to effectively lead and influence others.

“Influence is part of nearly every communication and occurs in virtually every human interaction. Influence is crucial to business, too. It is so fundamental to leadership that there could be no leadership without it”, writes thought leader, coach, and consultant to global companies, Terry R. Bacon, Ph.D., in his brilliant and insightful book Elements of Influence: The Art of Getting Others to Follow Your Lead. The author describes the important features that make influence, both ethical and unethical, so critical to understand for both organizational leaders and followers.

Terry Bacon makes the important point that everyone uses influence at various times in both their personal and professional lives. Terry Bacon also provides the valuable idea that influence is not simply the domain of the rich and powerful, but is a skill that can be learned like any other. The author shares the essential techniques for improving an individual’s skills in exerting influence. The author draws upon decades of research to uncover the true purpose and meaning of influence. Terry Bacon goes straight to the core of what influencers seek from the people who they want to influence. The author then provides the crucial results of that act of influencing others, both positively and negatively, and how those outcomes relate to effective leadership.

For me, the power of the book is how Terry Bacon combines a strong theoretical framework for the concept of influence with very practical techniques for improving personal influence. The author strengthens his outline of influence through the backing of decades of research and study into the topic. Terry Bacon ties the principles of influence into the important issue of leadership effectively, giving the book an overall outline and purpose.

I highly recommend the essential and research based book Elements of Influence: The Art of Getting Others to Follow Your Lead by Terry R. Bacon, Ph.D., to anyone seeking a comprehensive study of the principles of influence combined with a step by step process for learning the techniques of becoming an effective and ethical influencer. This book provides the methodology for utilizing influence in the right way to build strong and ethical leadership, while offering information about how to counter and avoid using the manipulative methods of influence’s darker side.

Read the groundbreaking and information filled book Elements of Influence: The Art of Getting Others to Follow Your Lead by Terry R. Bacon, Ph.D., and discover the importance of influence in people’s business and personal lives. This book contains the techniques for learning and developing the skills necessary to become an ethical influencer of others, and a better and more effective leader in all areas of your life.  —Wayne Hurlbert, Blog Business World

How to order this book