The Spring of Our Discontent

The three most indelible images of the spring of 2020 will be shuttered stores, socially distanced Americans wearing masks, and a white cop murdering an unarmed, handcuffed black man by kneeling on his neck.  As I write this, protests over the death of George Floyd are continuing across the country and beyond.  Most of the protesters are peaceful, but some have vented their rage or taken advantage of the chaos by rioting and looting.  The nightly scenes of burning cars and buildings and lines of riot police and National Guard troops shooting rubber bullets and tear gas at surging crowds recall the worst riots of America’s troubled legacy of slavery and the oppression of minorities.  It astonishes me that more than one hundred and fifty years after the end of the Civil War, some Americans still cling to the inane belief that ethnicity and skin color matter, that one race can be superior or inferior to another. 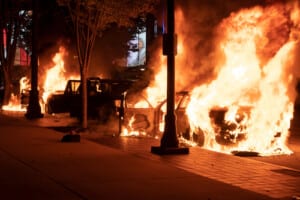 The turmoil following George Floyd’s murder is no doubt exacerbated by months of enforced pandemic isolation, record unemployment, and the dread many Americans must feel, not only about dying from this pandemic, but about the prospect of losing their homes or apartments and feeding themselves and their children.  When forty million working Americans are out of work and watching their savings dwindle, and when hundreds of thousands of small business people are closing their doors, many of them forever, and when we witness a corrupt and incompetent president failing to address the pandemic seriously until it’s too late—the general malaise in our communities manifests itself in depression and systemic anxiety.  Then another black man is killed at the hands of a white cop, and this time the look on the cop’s face is one of smugness and superiority as he kneels on the black man’s neck for almost nine minutes, even after his victim lies unresponsive.

It is a sad commentary on our society that this could still happen in 2020, that such police tactics as restraining a suspect by kneeling on his neck haven’t been outlawed decades ago.  The murderer, Officer Derek Chauvin, is a 19-year veteran of the Minneapolis Police and has a long record of using excessive force.  With that record, why was he still employed as a policeman?  How could the Minneapolis Police Department not recognize his penchant for violence and either fire him or take him off the streets?  A week after Floyd’s death, we watched as two members of the Buffalo Police Department shoved an unarmed, white, 75-year-old protester to the pavement and then walked on, along with a dozen of their fellow officers, as the man lay there with blood pouring from one ear.  What, in God’s name, has happened to the idea that our police are sworn to serve and protect?

We have a president whose pettiness, racism, misogyny, and self-service are not only blunting an effective federal response to the crisis but actively abetting the divisiveness and anger Floyd’s death prompted.  Trump’s decision to use of the American military to contain the protests is what petty dictators do when their citizens rise up.  And his cynical photo op at St. John’s Church was one of the low points of his dismal presidency.  Holding up a Bible as an appeal to his base was callous and reeked of insincerity and political calculation.  Anyone who believes that Donald Trump is a Christian, or has even read the Bible, is drinking the Kool-Aid.  This is not to say that Trump is without religion.  The evidence from his life and behavior indicates that he does believe in a holy trinity:  Himself, Money, and Power.  That is what he worships.

He is a malignancy, but even worse are the banana Republicans who have compromised their Republican ideals—and Constitutional responsibilities—to placate him, feather their own nests, and avoid offending his base by criticizing him or opposing him in any way.  As shocking and sad as George Floyd’s death was, it has been more painful to watch the slow erosion of our democracy at the hands of a disgraceful president and Republican senators who have failed, despite Trump’s repeated assaults on our institutions, free press, allies, and treaties, to resist his unquenchable thirst for power and exercise their responsibilities as a key branch of our government and a check his excessive use of executive power. 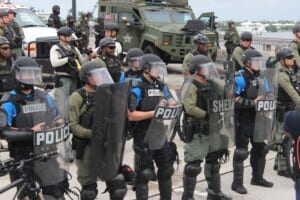 Police and National Guard troops were out in force to quell the worse of the rioting, but Trump wanted to mobilize even more troops to dominate the streets.

The banana Republicans have stood idly by as this wanna-be autocrat has taken greater and greater liberties.  Now we’re facing an existential crisis on multiple fronts.  The Covid-19 pandemic has taken over a hundred thousand American lives, many of which were unnecessary deaths, because Trump ignored the signs and dismissed the virus when it was clear to the experts that it posed a lethal threat.  Now millions of Americans are out of work, perhaps permanently, and hundreds of thousands of small businesses (and some big ones) will fail because of Trump’s belated recognition that the pandemic was real and would not, as he asserted, disappear through some miracle.  Now we have serious civil unrest because the racism and white supremacy Trump coddles has led to a black man’s death that has finally ignited the level of acknowledgement and activism that could lead to significant change, if not in the hearts and minds of those who support Trump, at least in the policing practices that led to Floyd’s death.

The murder of George Floyd provoked a greater outpouring of rage than any of the previous killings of black Americans by white cops, and as I watched the video of that cop kneeling on Floyd’s neck, I wondered why this killing had so much impact.  I believe it’s for several reasons.  The image of a white man kneeling on a black man’s neck represents not just a single instance of racial violence but is emblematic of centuries of oppression—from the slave trade to reconstruction and the birth of the KKK, and from Jim Crow and segregation to police violence during the Civil Rights movement of the sixties.  Also potent is the image of a black man dying by an assault to his neck.  The neck is a highly symbolic part of the human anatomy.  People are executed by being hanged by the neck.  African slaves, particularly males, were often restrained by collars around their necks, and in one of the most disreputable periods of our nation’s history, blacks were lynched by white mobs.  Photos of those lynched bodies are a painful reminder of the racial fear and hatred that are part of America’s legacy.  Black lives do matter.  All lives matter. 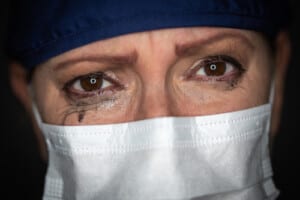 Compounding the anguish over George Floyd’s murder is the pandemic that has left many Americans feeling isolated and depressed.

Our nation is in crisis, and the only hope we have to reverse this ruinous course will come in November with the general election.  No significant change will come from a racist president whose response to these protests has been to call the protesters “terrorists,” order the military to dominate the streets, and threaten violence by proclaiming, “When the looting starts, the shooting starts.”  No significant change will come from a national leader who lacks empathy, has no understanding of the Constitution, and views himself as an all powerful dictator.  And no change will come while we have do-nothing Republicans in the House and Senate who remain silent and cower when their master speaks.

We need to vote Trump out of office.  Equally, we need to vote out the complicit Republicans who have actively or passively colluded with him.  Maybe, if enough Republicans are defeated, the remaining members of that grand old party will regain their senses and return to the Republican ideals that have made them essential partners in our democracy.  Thereafter, we pray that we will be reunited as a people, that we will finally make real strides toward racial equity and equal justice, that our government will act in a non-partisan manner and return to responsible free-world leadership, and that the Administration will benefit all Americans instead of one man and his family.