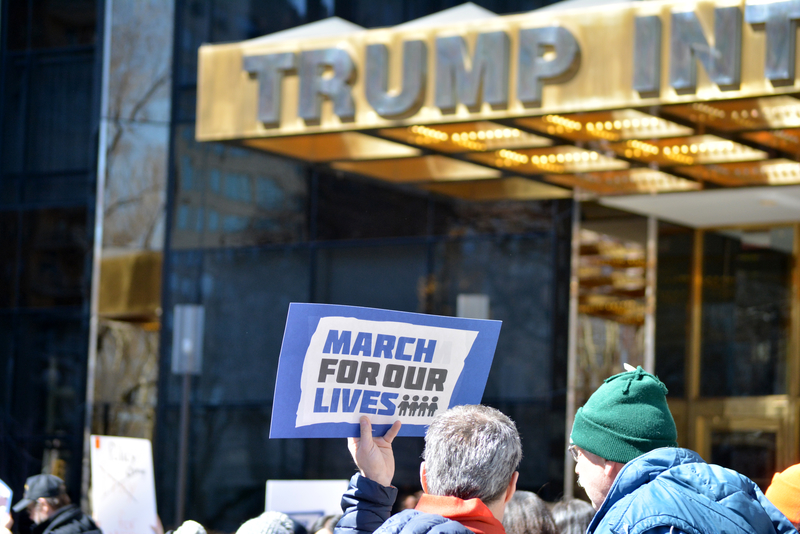 Even more remarkable, March for Our Lives was organized and led by high school students pushing for greater gun control following the mass shooting at Marjory Stoneman Douglas High School in Parkland, Florida.  It is estimated that as many as two million people joined protest, with more than a quarter of a million marking in Washington.  The protest signs the marchers carried bear witness to the emotional energy of the moment and the marchers’ commitments to change.

Make America Safe Again is an ironic twist on Trump’s famous campaign promise to “make America great again.”  It reminds us, first, that a nation cannot be great if its children are regularly massacred in their schools.  In a civilized society, mass murder in schools should never occur.  This sign reminds us, too, that America used to

be safer than it is now.  When I attended high school in the early sixties, school shootings were unheard of.  The America of today is a more violent place in part because we have more guns per capita than any other nation on earth, and our politicians lack the will and courage to effect sensible constraints on acquisition of the most dangerous weapons.

Accepting Change is a powerful reversal of American theologian Reinhold Niebuhr’s Serenity Prayer:  “God, grant me the serenity to accept the things I cannot change, courage to change the things I can, and wisdom to know the difference.”  When you’re angry enough, serenity is an apathetic option.  You can remain silent, or you can stand up and shout like the lunatic television news man in the movie “Network” who encouraged viewers to open their windows and yell, “I’m mad as hell and I’m not going to take it anymore!”    But anger abates and hopelessness in the face of political inaction dulls

the senses as well we the passions, so change will not occur unless the energy and commitment shown in this march continues.

Large Crowd shows a few of the hundreds of thousands of people who marched in D.C.  It reminds us that mass movements are a collection of millions of individual commitments—every person who decided to march that day instead of going to brunch, walking in the park, seeing a movie, or doing a hundred other mundane things.  Each person decided that the issue was important enough for them to do something extraordinary, to make a protest sign, to show up, to join hands with others in a common cause.  It reminds us, too, that mass movements cannot be sustained unless in the weeks, months, and years following, millions

of individuals recommit and continue to ACT.  One protest, however large, will not change the minds or voting behavior of the politicians who run our country.

Teacher’s Protest captures the angst of young teachers marching that day.  School should be a second home, not a last home.  If we have to play defense with a school shooter, we’re already too late.  My classroom should not be a crime scene.  Schools are for learning, not lockdowns.  I’m with Emma.  We call BS.  I teach the generation who will save us all.  Those last two signs referring to Emma Gonzalez, one of the most vocal of the Parkland students, and to the generation of high school students who are saying “enough is enough.”  Amen.

Kevlar shouldn’t be on anyone’s school supply list.  In recent weeks, teachers in Kentucky, Oklahoma, and Arizona have been protesting low pay and insufficient resources in schools.  I’m reminded of the grade school teachers I know who routinely use their own money to buy school supplies for students whose families cannot afford them, that teachers salaries are shamefully low for the services they provide, and that state spending on schools has steadily declined.  But the broader issue here is how, in the Age of the Gun, we can protect our children in what should always be a very safe environment for them.

If I die in a school shooting is a powerful image not only for the message on the sign but also for its two symbols of death:  the girl’s closed eyes and her shadow cast on the sidewalk beside her.  Interestingly, in the “#NEVERAGAIN” sign held by the man behind her, the assault rifle is pointed at the girl, signifying the anonymity of the victims of mass shootings.  But if this girl dies, she wants her body laid at the feet of the mostly Old White Men (OWM) in Congress whose continued inaction on gun control enables mass murderers in school shootings to easily obtain their weapons of mass destruction.

I’m joining whatever political party those kids in Florida just started reflects the truth that political change is rarely led by older people; it’s led by the young, by those who are old enough to know things are wrong and outraged because the problems are not being fixed by OWM in power.  The older some people get, the more conservative they become because they want to

protect the status quo.  We fought a Civil War because an entire region of the country wanted to preserve slaving-owning plantation life.  What’s notable in this image is that most of the people shown are older.  In fact, the average age of the protestors was 49, and not all were there to advocate for gun control.  Forty-two percent of marchers were there to opposed Donald Trump.  Many equate Trump with the continued inaction on gun-control legislation, a fact that may plague Republicans in the mid-term elections.

The Number of Bullet Holes sign reflects an uncomfortable truth that radical Second Amendment advocates frequently ignore—that the high capacity and rate of fire of assault rifles makes those weapons more suitable to mass shootings than to hunting.  If target practice is your goal, then you don’t want a gun whose rapid-fire recoil makes target shooting too erratic, and if your goal is hunting, one carefully aimed shot is more humane and sporting than spraying the field with bullets.

Hostage is a recreation of Michael de Adder’s cartoon in the Toronto Star of the NRA threatening to shoot the Statue of Liberty.  The gun lobby is the single most powerful voice against gun control—in any form.  They oppose any restrictions on gun ownership despite the recent spate of massacres at Parkland, Orlando, Las Vegas, Sandy Hook, Virginia Tech and more too numerous to mention.  The NRA maintains its stranglehold on the OWM in Congress (and the Presidency) not only through political campaign donations but also by grading public officials who support or oppose them.  Politicians who support sensible gun control are intimidated by potential NRA-sponsored smear campaigns.  The NRA is estimated to have around five million members, which is just 1.5 percent of the U.S. population.  It is the ultimate example of the tail wagging the dog.

Change is Coming is an important reminder that the mid-term elections are looming.  As long as the Republicans control the House and the Senate, there will be no meaningful action on gun-control legislation.  The Republican OWM in Congress are owned by the NRA, whose members constitute only 1.5 percent of the country’s population.  The only road to change is to vote the Republicans out.  The students who organized and led March for Our Lives are too young to vote yet, but they will be voters in a few years.  Meanwhile, the adults who support their cause and believe that meaningful gun control is essential must vote in their stead and throw the NRA-supported OWM out.

The March for Our Lives protest was a stunning achievement for high school students who have suddenly, unexpectedly been thrust into the national limelight and are leading what they pray is a revolution.  Kudos to them and the adults who joined them.  However, this protest will amount to nothing more than street theatre unless they (we) have the energy and commitment to sustain the momentum and exercise our right to vote in November and again in 2020 when Trump—if his scandal-ridden administration lasts that long—is up for reelection.

Many thanks to photographer Bob Greenberg for permitting me to publish these photos.  You can find more of Bob’s work at BobGreenbergImages.com.  Background image of the March for Our Lives in front of the Trump Tower is used with permission (Cpenler | Dreamstime.com).