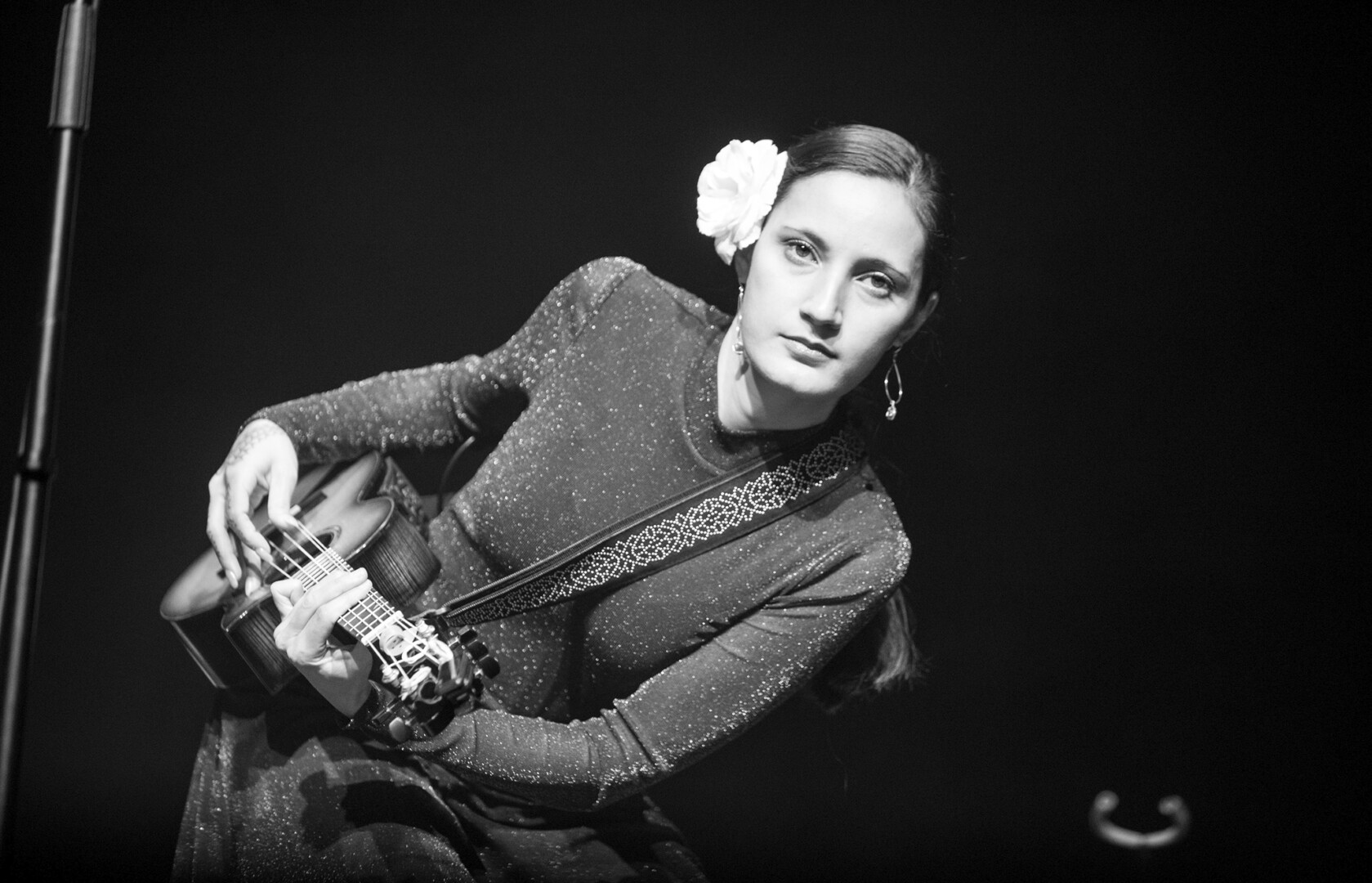 NOTE TO READERS:  Since posting the following article about Taimane Gardner, Covid-19 has shut down our world.  Music in the Mountains has decided to postpone its 2020 summer festival, so Taimane will not be appearing this summer.  Hopefully, her concert will be delayed by no more than a year, but we don’t know yet when it might be rescheduled.  For the time being, I’d suggest clicking on the YouTube links below to hear some of her music.  I will update when I know more.  Meanwhile, keep your social distance and stay safe.

Taimane Gardner, one of the world’s premier ukulele players, is coming to Durango, Colorado, this summer as part of the annual Music in the Mountains festival.  She will appear at the Chocolate Indulgence event at Cascade Village on Wednesday, July 15, 2020.

I first saw Taimane perform in New York City at a nightclub in the Village.  I’d never heard of her and would not have gone to the club had I not been assured by Denise Leslie, the ukulele maven of

the Four Corners region, that this was a not-to-be-missed performance.  I’d learned that Taimane was from Hawaii, so I was expecting the beachcomber and swaying hula music you hear at a luau.  Then this beautiful waif appeared on stage with her tiny ukulele and enigmatic smile, and when she started playing I was dazzled by three things:  (1) I didn’t know an ukulele could make those sounds, (2) I’d never seen anyone play a string instrument that fast, and (3) this young woman could play everything from Bach to Led Zeppelin.  She is a virtuoso with a repertoire that encompasses the surf sounds of the sixties, and classic rock and roll, and flamenco, and hardcore, strait-laced classical, and she can morph from one genre to the next in mid-flight.

Taimane has long, nimble fingers that move across the fretboard with a precision and grace you normally see in world-class pianists—and if she hit a single wrong note, I didn’t hear it.  She began playing the ukulele at five and was discovered by Don Ho at thirteen, when he invited her to join his variety show at the Waikiki Beachcomber.  In her teens, she studied with renowned ukulelist Jake Shimabukuro, whom most of us would not know, but in Hawaii he would be like studying guitar with Jimi Hendrix.  Now in her early thirties, Taimane has performed around the world and has become not only a master of the instrument but a captivating performer as well.

On stage, she doesn’t stay anchored to the floor the way many instrumentalists do.  She dances and roams with restless energy, sometimes prancing, sometimes gracefully bowing and carving up space to an inner rhythm that seems to flow from her music but at a different tempo, her face lit by a secret smile I could not interpret.  I didn’t know if she was smiling at the joy of performing—capturing the ecstasy of her moments on stage—or if she was smiling at her connection with a captivated audience, or if her smile derived from the sheer pleasure of weaving such lyrical tales from the instrument in her hands.  Perhaps it’s all three.

Here are some YouTube clips showing Taimane in performance.  These clips showcase her virtuosity as well as the range of her repertoire:  from Bach’s Toccata to Led Zeppelin’s Stairway to Heaven, to Chris Isaak’s Wicked Games (performed in a beautiful Hawaiian setting), to a medley of surfing classic tunes, to Beethoven’s Für Elise like you’ve never heard it, to her standout performance at TEDx in Maui.  These clips will introduce you to one of the finest instrumentalists you’ll ever hear, but there’s nothing like seeing her in person.  Music in the Mountain’s Chocolate Indulgence this summer will be a don’t-miss event.  The chocolate will be provided by sponsor Animas Chocolate Company.  What could be better?  Delectable chocolates, cocktails, and Taimane Gardner.  You’ll be dazzled.

Photo credits:  Photos of Taimane Gardner courtesy of Music in the Mountains.  Used. with permission.