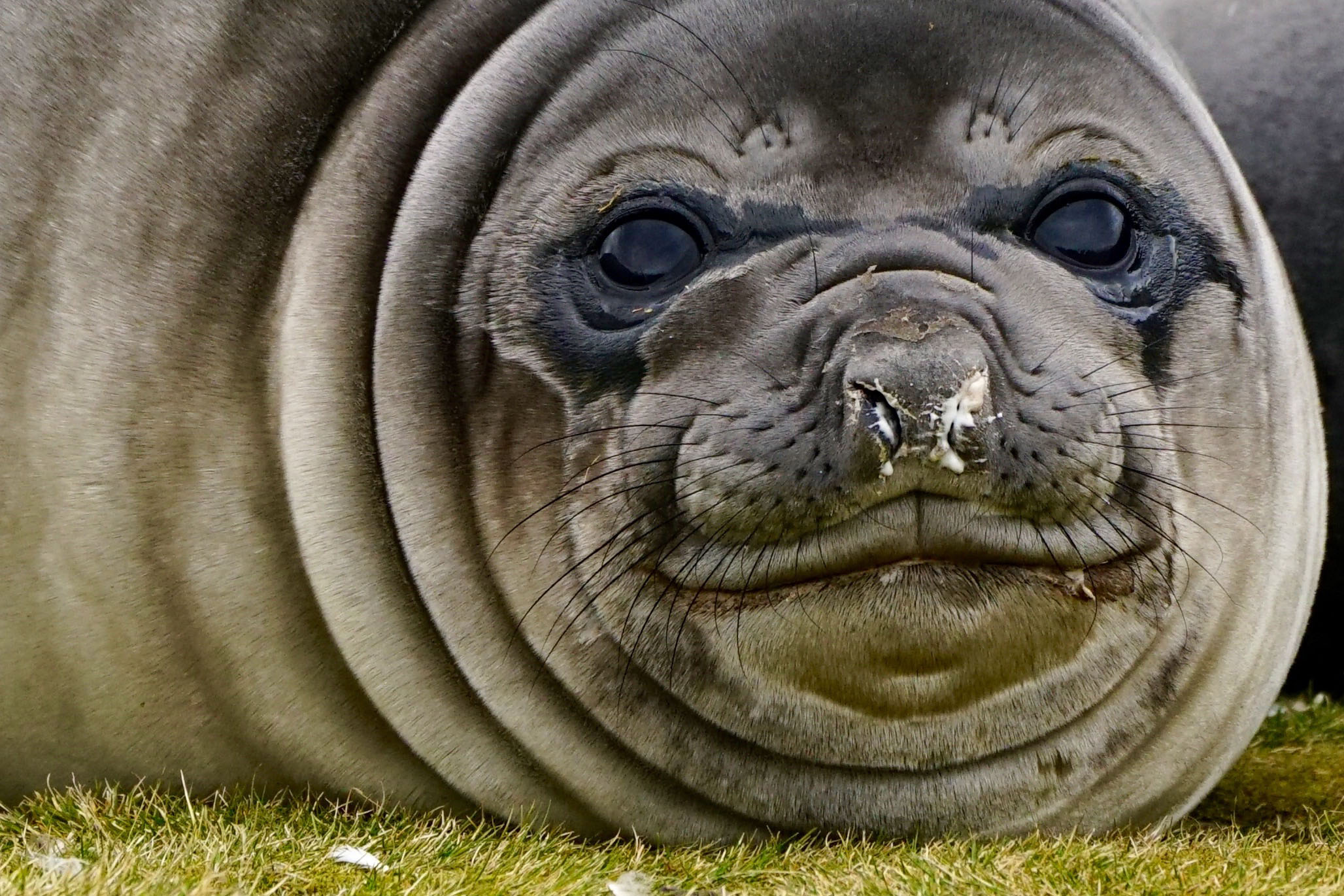 I recently published a gallery from photographer Michael Wooters on penguins in Antarctica and South Georgia Island.  In this follow-up article, I’m presenting sixteen of Michael’s photos of seals on South Georgia Island, which is a remote island in the South Atlantic, hundreds of miles from other land masses in that cold and forbidding part of our planet.  South Georgia is part of a largely undersea extension of the Andes mountain range and is principally home to elephant seals, fur seals, and king penguins.  The island was discovered in 1675 by a London merchant but commercial sealing did not begin until 1786.  It continued until 1964 when the last large whaling stations, Stromness and Grytviken, closed their doors.  By the early 20th century, Antarctic fur seals had been hunted nearly to extinction.  Since then, with the cessation of commercial sealing, the fur seal population has grown substantially and now numbers more than 1.6 million animals on South Georgia alone.

Called Sea Bears by early mariners because of their large, furry heads, these animals can turn their hind flippers backwards for propelling themselves through water or forward for moving swiftly across land.  Though they look ungainly, they can scurry across a beach faster than humans, and they have formidable teeth, so it’s best not to wander too close to them.  The bulls zealously guard their harems of five or six cows.  After pups are born, they are fed for about three months before their mothers return to the sea, and the pups are left to fend for themselves.  Fur seals are moderately deep divers, generally hunting at 150-175 feet, where they feed on krill, small fish, squid, and an occasional penguin.  They are distinctive not only for their furry heads and necks but also for their small ear flaps and long whiskers.

“Who are you and what’s that noise?”  An elephant seal pup twists its head as though trying to understand whatever its little fur seal buddy is saying.  Like babies everywhere, these pups are often comical in their interactions with others as they try to make sense of the world and other creatures in it.  In our National Geographic/Lindblad excursion through the South Atlantic, we arrived at South Georgia Island weeks after many seal pups were born.  They were young enough to still be curious and playful, but if the elephant seal pup on the left is a male, he will grow to weigh four tons and will become fearsomely aggressive if you invade his personal space.  But at this stage, with its huge black eyes and rolls of skin on its neck and torso, the pups are amusing to watch and, as you’ll see in the next photo, will frolic with you if you give them the chance.

One of our fellow explorers sat on the beach with his legs extended, and an inquisitive elephant seal pup waddled over and climbed onto his lap.  This pup may never have seen a human being and was curious about this novelty on its beach.  Encounters like this one are bound to end well.  The pups lack teeth and don’t weigh enough yet to crush someone.  It would be anthropomorphic to say they are “friendly,” but they don’t know to be afraid and are driven by the desire to find milk.  When this pup realizes that the man on the beach has nothing to offer, it will waddle off in search of better pickings.

Crabeater seals (also called white seals) are the most abundant seals in the world.  They live on pack sea generally below the Antarctic Convergence and need access to the open sea.  They feed primarily on krill, consuming twenty to twenty-five times their weight in krill every year.  Their young are susceptible to leopard seals, and the adults are a favorite food of killer whales.  So a lazy day on the snow is a good day if you’re a crabeater seal–as long as your belly’s full of krill.  Crabeaters are ironically named because, in fact, they don’t eat crabs.  Their name comes from the German word “Krebs,” which means crustaceans, and the crabeater’s main food source, krill, is a crustacean.  Crabeaters often lie in small groups of three or four, but this stout fellow was by himself, and he was unimpressed by human presence.

Beaches on South Georgia Island and in Antarctica were sometimes so crowded we couldn’t land on them.  This beach was an exception, though sleeping bull elephant seals lay scattered around the beach, like this fellow lying flat, his flippers extended, his Cyrano-de-Bergerac-worthy proboscis dominating his face.  His normal beachcomber routine is being disrupted by a marching of penguins behind him and that giant ship anchored in the bay.  On the other hand, he doesn’t look like he cares.

For readers old enough to remember Jimmy Durante, this bull elephant seal (the one on top, naturally) will remind you of “The Snooze.”  It’s not clear what a nose this prominent does for the males, but they are unmistakable when their noses become this enlarged.  The bulls can weigh as much as four tons and can crush other seals they roll on top of.  The female shown here doesn’t look pleased.  If this is a mating dance, the male may want to reconsider this approach.

This sleepy eyed fellow looks like he’s just awakened from a nap.  Weddell seals are among the largest of the seals and are excellent divers.  They are capable of diving from one thousand to two thousand feet.  At two thousand feet, they may encounter the giant Antarctic Toothfish (aka Antarctic Cod), which can be six feet long and weight 300 pounds.  Normally, however, they feast on krill and squid.  Their natural enemies are killer whales and leopard seals.

Now this Weddell Seal doesn’t look too happy about being disturbed during its nap.  But these seals are more docile and approachable than other seal species.  Still, they’re wild animals and will react aggressively if their personal space is invaded or if their pups are threatened.  Weddells live on fast ice when they’re not in the ocean and sometimes have to chew through the ice upon returning from feeding in the sea.  This grinds their teeth down, and Weddells live only until their teeth are gone, which may be 20 years.  Other seal species may live to forty years of age.

An intrepid explorer sitting on a South Georgian beach has found a new friend in the elephant seal pup cozying up to her back.  The pups are very curious as well as fearless about humans.  This beach scene–crowded with sleeping seals and a flock of (mostly) king penguins–is common.  During breeding season, South Georgia is home to millions of seals and penguins–more than congregate anywhere else in the world, making South Georgia Island the premier destination for observing subantarctic wildlife.

If you were in the water in Antarctica, you would succumb to hypothermia fairly quickly, and compared to this alternative, that would be a pleasant way to go.  Leopard seals, formerly called Sea Leopards, are fearsome predators.  When they catch penguins, they shake them so furiously that the bird is turned inside out.  Leopard seals are not known to attack humans, but you wouldn’t want to trust that knowledge too far.  They have long necks and a pattern of spots on their chests and bellies, hence their name.  We discovered two of them near an iceberg just off the shore in Antarctica, where Michael Wooters captured this face-on shot.

Here is an even closer look at a Leopard Seal’s face, one eye peering at the camera.  They have large mouths and formidable teeth.  We were warned about putting Go-Pro cameras in the water.  Leopard Seals are unpredictable and can be aggressive.  They’ve been known to bite rubber rafts, and there were ten of us in one when this shot was taken, so we were careful to keep our distance.  Needless to say, this close-up was captured with a telephoto lens.

Elephant seals, like all seals in the Antarctic region, spend most of their lives in ice cold ocean water.  All except fur seals are protected from freezing by a substantial layer of blubber, which is an insulating layer of adipose tissue or fat that keeps warmth in and cold out–a survival imperative for these warm-blooded, air-breathing creatures.  These cows can weigh 2,000 pounds, can dive as deep as 3,000 feet and can spend 30 minutes underwater, where the cold and pressure are extraordinary.  In those black depths, they hunt for squid.

In this humorous shot, a seemingly terrified elephant seal pup is trying to escape an angry young bull elephant seal while an Antarctic fur seal looks on.  As this drama played out, the pup kept scrambling away from the bull, who was honking aggressively either at the pup or the fur seal (it wasn’t clear which was the focus of the bull’s wrath).  On crowded beaches, disagreements like this are common, although most are between males keen on defending their turfs by scaring away other encroaching males.  The pups occasionally get caught in the crossfire.

Michael Wooters became serious about photography in 1999 while preparing for a safari in Kenya.  His first camera was a Canon SLR.  Today, he uses a Sony 7RII, which is a mirrorless, full-frame, high ISO (102,400), 42.4 megapixel camera, ideal for live action photography.  He primarily shoots with a Sony FE 24-240 mm f3.5-6.3 10x zoom lens and, for longer shots, a Sony FE 100-400mm f4.5-5.6 GM lens.  Both lens are noted for high resolution and sharpness and have Sony’s Optical SteadyShot image stabilization system for taking action shots without a tripod.

You can see more of Michael’s photography at michaelwootersphotography.com.  He may be reached at photopapawooters@gmail.com or (503) 551-7121.