“Machete Donald Trump” is a retrospective piece written by Nancy Piatt, a retired middle-school teacher who wondered what it would have been like to have a school-age Donald Trump in her Language Arts class.  At the end of the piece, she hopes that Trump receives a failing grade in the coming election.  Of course, that election has passed, and we are proud to report, Mrs. Piatt, that the Donald did flunk out.  But the malignancy of his four years in office, while fading, has not yet faded enough, and so people like Nancy Piatt and I continue to wonder how someone as self-centered, cruel, and repugnant as he could ever have attained the nation’s highest office.  I think you will enjoy middle-school teacher Nancy Piatt’s fantasy about having Donald Trump in her classroom. 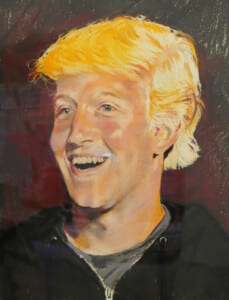 I have been retired for ten years – Prior to that, I was a middle school language arts teacher for 38 years, a job that I loved. During that time, my days were filled with the roller coaster emotions and foibles of young teenagers. The dramas and frequent meanness of girls. The skirmishes and sometimes territorial disputes of boys. And for some reason recently that dicey world of young adolescents has brought me thoughts of our current president. Now I know this is a stretch but…I’ve been imagining what it would have been like to be Donald J. Trump’s middle school teacher!

I realize that in the ten years since I’ve been out of the field, classroom methods and discipline techniques have changed, so in my imaginings, I’m going back to the days and ways of how my middle school team and I would’ve dealt with Donald. And in doing a little research I learned that at the age of 13 Donald got into a little trouble and his parents moved him to the New York Military School. And that is not fake news!

So let’s go back to my fantasy and picture of Donald in Mrs. Piatt’s Language Arts class. In my classroom, the content of my instruction focused on composition, literature, vocabulary, and speech… I loved teaching writing for a variety of reasons. It sparked imaginations. It channeled students’ interests. But FIRST it required my students to think. (No doubt, Donald would’ve had trouble with that). Then, they had to organize their thoughts (another likely problem for Donald) and limit the scope of their topic. (Oh, if only someone had taught that to Donald!) Next came the work of doing a first draft and then a second draft after that. In that process, students would become aware of ideas that worked and didn’t work. (I honestly wonder if Donald has ever had enough insight to question the validity of his ideas.)

My students also did peer conferences where they were required to share their work with a partner and listen to what that person suggested might improve the original. I have a hard time picturing Donald sitting still and nodding in agreement when someone questioned or challenged his thoughts. I have a hard time picturing Donald wanting to help someone else improve his work. Another step before the final draft was handed in dealt with word choice. Students had to comb their piece and analyze their word choices, seeking to identify overused or weak word choices. Then they went in search of new, improved ways to say something, often with the help of a thesaurus. How I wish that someone had taught that skill to Donald! Think how many, many Greats, Fantastics, Bigs, and Reallys we all could have been spared in his speeches, let alone his tweets. I’m fairly confident that Donald would not have been a fan of writing in my English class. 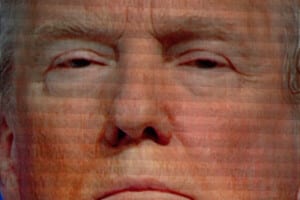 Trump’s cold eyes and dispassionate face suggest a person devoid of empathy and the benevolent good will in most people’s hearts. As a boy, he was spiteful, narcissistic, and cruel.

Literature was another significant part of my curriculum. In the course of a year, our literary explorations would take us through poetry, novels, plays, and more. As a follow up, there would be class discussions, often with open-ended questions that encouraged a wide range of opinions. I can easily picture myself having to rein Donald in when he didn’t like the other guy’s opinion or when someone didn’t happen to agree with his. Another part of literature in my class was independent reading. My students each had a classroom document called a reading wheel, which resembled a pie chart with each section labeled with a subcategory of literature like romance, science fiction, etc.  The idea was to provide students with many different options and to challenge them to read beyond their usual one favorite topic or author. But among those topics I required three subcategories: biography, autobiography, and different culture. I’d bet a lot of money that Donald would have resisted all three of those. So did many of my students and yet often when they were finished reading about an Arthur Ashe, Nelson Mandela, Harriet Tubman, or Anne Frank, they were glad for the experience.! I think that maybe as a young man, had he been required to learn more about people of color and different cultures and their struggles, we might see more compassion in the adult Donald.

In the small middle school where I taught, we teachers were a cohesive team that shared a philosophy about students and learning and consequences and so we had a school-wide discipline plan. In every classroom you would find the same five basic rules: Come prepared, respects others, etc. One rule that we were all serious about was stated in these words: No name calling, no cruel teasing or put-downs allowed. When a student violated that rule, we immediately dealt with him. I’m sure you can see where I am going with this. No one can deny that if the younger version of himself were true to his adult one, Donald would likely be in trouble daily. The man who spews insults like “slime ball, wacko, loser, moron,” as an adult, probably would’ve had a similar arsenal as a kid. The adult who calls a former Miss Universe Miss Piggy, who labels the Wall St. Journal staff dummies, would probably have spent some serious time in lunchroom isolation or detention or the principal’s office depending on the nastiness of his remarks.

As we all know, education isn’t just about what happens in the academic classrooms. There are all those other places and activities that contribute to how children develop into their adult selves. So I try to picture Donald in PE class. Most teachers there strive to emphasize fitness and fun over competition. So I try to envision Donald in his gym clothes, being a team player, reaching down to help a player up, cheering on a less talented individual – but somehow this just doesn’t fit with the adult guy who mocked a disabled reporter. 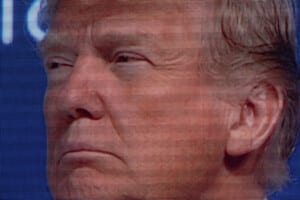 Unfortunately, Donald Trump did not grow up to be as compassionate and kind as Mrs. Piatt hoped.

Let’s try the cafeteria. Even before Michelle Obama launched her healthy eating plan for schools, cafeteria staffs were charged with the responsibility of providing well-balanced meals for their students, and lunchroom supervisors were encouraged to make their rounds complimenting the students who were giving the daily menu their best efforts. I wonder if even back then, Donald’s taste for chicken nuggets and French fries would have kept him from eating the daily fare of sloppy joes and fish sticks. My guess is, “If Donald didn’t like it, Donald didn’t eat it.”

Overall, I can’t help but wonder if early on in his education, more interventions in his behavior might have created a somewhat more likable, compassionate, self-disciplined man. And who knows that there weren’t caring instructors who tried their best. Maybe some sat around in a teachers’ lounge back then worrying about what was going to become of this kid. Meanwhile, here we are— having to put up with this overgrown, self-absorbed adolescent. Our best hope now is that he flunks out in the next election.

Reprinted with the author’s permission.