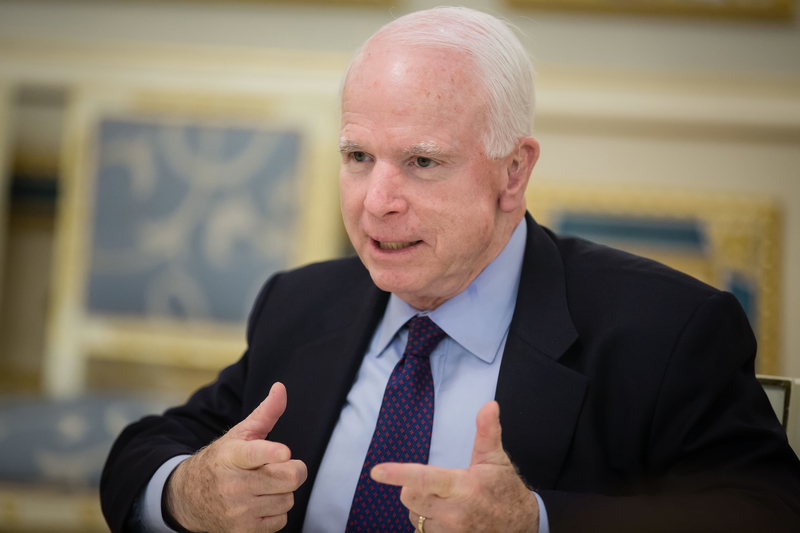 August 26, 2018.  Senator John McCain died yesterday of the brain cancer he’s been battling for a year.  The tributes are pouring in, as they should, for a towering figure in American politics:  a war hero from a line of Navy admirals, graduate of the Naval Academy, a Navy pilot during the Vietnam War who was shot down and held prisoner for five years, a six-term United States Senator from Arizona, and a presidential candidate twice.  McCain described himself first and foremost as a servant to the country he loved, and we’ve rarely had so honorable and courageous a public servant.

One of the most remarkable episodes in John McCain’s life occurred while he was a prisoner of war.  After a year of captivity in the infamous Hanoi Hilton prison camp, McCain was offered an

early release, but he refused to leave his fellow prisoners, saying that he was not a hero himself but was in the company of heroes.  In refusing to abandon his fellow POWs, he had to endure another four years in deplorable conditions.

Can you imagine the current occupant of the White House turning down release from a prison where he is mistreated and tortured because he refuses to abandon his fellow prisoners?  No, you can’t because in character, leadership, and public service Donald Trump is the opposite of John McCain.

McCain stood up for what he believed in and fought for changes in public governance that he felt were essential, namely, campaign finance reform.  He believed that the special interests had far too much influence in Washington and sought to limit them.  It was a noble effort but times have changed and McCain’s efforts failed, as evidenced by the influence peddling and corruption in the current administration.

In the 2008 presidential campaign, McCain was the Republican nominee.  He faced Barak Obama, whose campaign of hope came in the waning years of an unpopular George W. Bush presidency and the crashing of the economy, which began in earnest in September, two months before the election.  The housing market had collapsed, throwing millions of people into debt who’d joined the bandwagon in leveraged real estate buying and causing banks and investment houses like Lehmann Brothers to collapse.  An overinflated economy, precipitated by inadequate banking regulations, disintegrated on the eve of the election, and Obama’s promises of hope were like manna from heaven.

Meanwhile, John McCain was waging a good fight to become president, but he was tainted by the outgoing Republican administration, which had left a sour taste in the mouths of voters.  Then

McCain made the single most damaging blunder of his political career:  he selected Sarah Palin as his vice presidential running mate.  Palin was an odd choice from the start.  She had very little government experience (Governor of Alaska), had no national presence on the political stage, and was oddly chirpy and uninformed from the start.  Her gaffes during interviews with reporters like Katie Couric left many people questioning whether she was prepared to occupy the White House if President McCain could not continue serving.  Had it not been for Palin’s unfitness to service, I think McCain may have had a fighting chance to win the 2008 election.  We’ll never know, of course, but in Palin’s conduct in the years following that defeat she has continued to undistinguish herself.

McCain was one of the few Republicans in Congress to stand up to the Trumpian tidal wave that has drowned nearly every other Republican voice.  He and fellow Arizona senator Jeff Flake have steadfastly refused to shame themselves by acquiescing to Trump’s dishonesty, moral turpitude, executive mismanagement, power grabs, and baldface lying.  McCain singlehandedly defeated an ill-thought-out Republican measure to destroy the Affordable Care Act, which would have caused millions of Americans to lose their healthcare coverage.  He has spoken out against Trump’s lies and made it clear that he would resist the worst of Trump’s initiatives.  He was one of the few senators to question Trump’s overtures to North Korean strongman Kim Jong-Un and his unsavory, lapdog relationship with Vladimir Putin.  McCain felt strongly that Trump was leading us down a disastrous path and said so publicly.  Few other senators have demonstrated such courage or steadfastness of principle.

McCain was known for his temper.  He could be as irascible an opponent as anyone ever had, but no one could question his courage, integrity, or commitment to the United States of America.  We’ve had other public servants as dedicated to preserving American values but none that surpassed John McCain in his loyalty to the country.

As our national leader, he would have held fast to sound principles and American values, worked tirelessly for nonpartisan solutions to our problems, and upheld the highest traditions of the presidency.  We might not always have agreed with him, but we would have had confidence that this selfless man was working in our best interests and was providing the kind of leadership we would wish to emulate.

I don’t need to point out that what we have now is nearly the exact opposite.  Trump is a puerile man who primarily serves his own interests, has no moral compass, is completely lacking in integrity, and lies so often that it’s the norm rather than the exception.  Donald Trump is a disgrace to this country, and in John McCain’s passing we find ourselves weeping twice—once for this valiant pubic warrior whom we’ve lost and once for the leadership he would have provided had he been our nation’s chief executive.

John McCain is the president we should have had, but in electing Donald Trump we have demonstrated that as a citizenry we don’t deserve a leader as honest, capable, and courageous as McCain would have been.  More’s the pity.