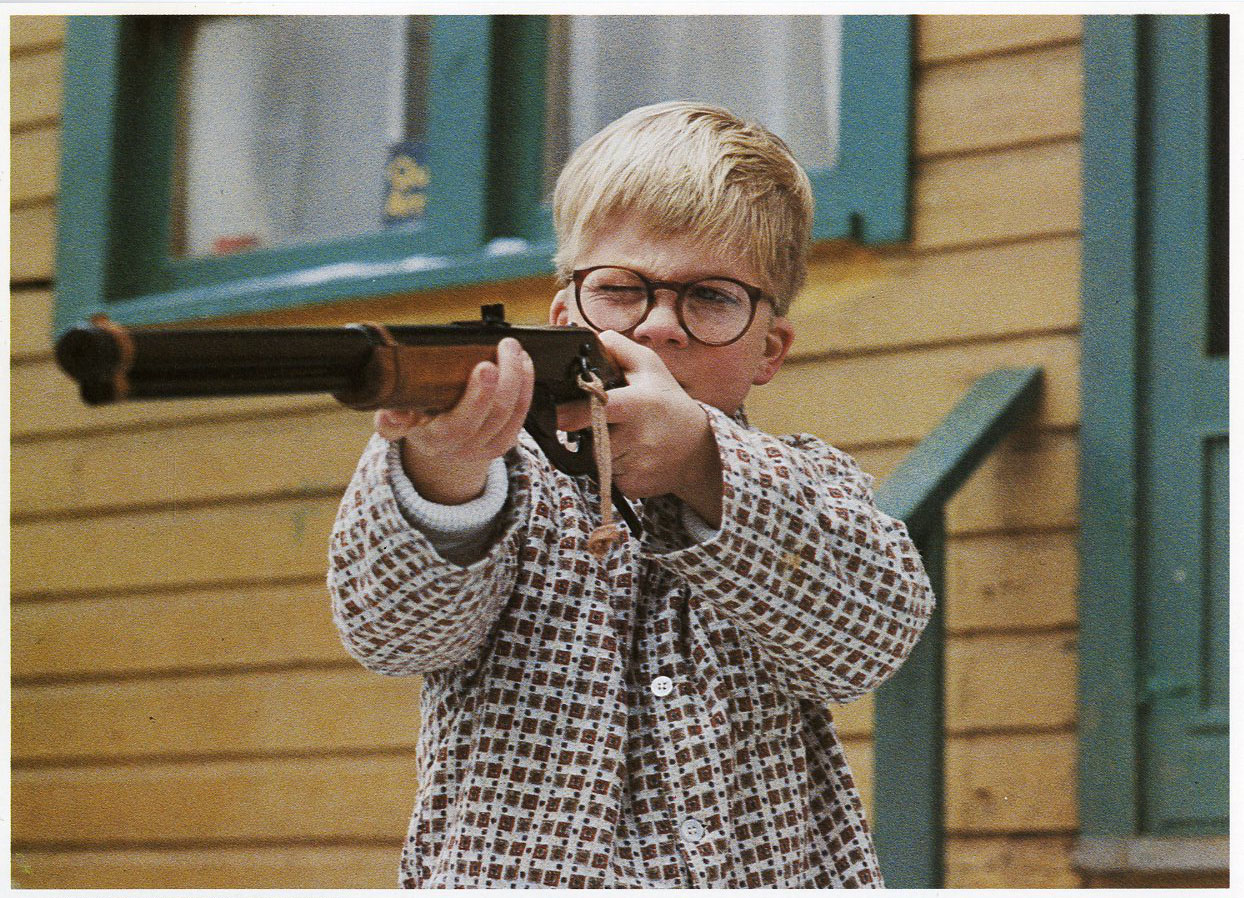 When I was a boy not much older than Ralphie in A Christmas Story, one of my prized possessions was a Daisy Red Ryder BB gun.  My father came from a rural family where guns were commonplace for hunting, and it was assumed I would follow in that tradition.  The BB gun was my apprenticeship for the shotgun I was to inherit from my grandfather when I got old enough.  As the oldest child, I had my own bedroom, and that room had a large closet with a slanted ceiling.  It served as my target range.   I had dozens of plastic toy soldiers, and I arranged them in menacing formations on the floor of my closet and spent hours shooting them down.  The closet was handy because most of the BB’s I shot stayed in there, so it was easy to gather them and reload after an hour of target practice.

Over weeks and months of happily mowing down toy soldiers, I became so proficient that I never missed.  So I began hiding them behind obstacles—shoes, wadded up socks, my sister’s wood blocks, anything that would partially conceal the enemy.  At first, their torsos were exposed.  Then that became too easy, so I started concealing all but their heads.  And after a while I never missed those shots either.  My brother had some hollow plastic dinosaurs that were open at their bellies.  I would place them around my bedroom at various angles to my line of sight.  If I shot the dinosaurs on their sides they would be knocked backwards, but that wasn’t much fun.  So I learned to angle my shots off the floor and topple the beasts as BB’s ricocheted up underneath them.

As a kid, I learned how to hold a rifle, steady myself, control my breathing, and squeeze the trigger without losing my aim.  I became an expert marksman.  With a BB gun. 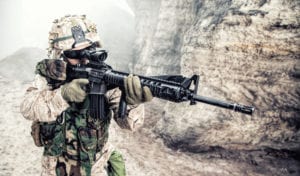 Then I joined the Army.  I already knew how to shoot, but firing real rifles was different, of course.  Real rifles kicked when you pulled the trigger.  I had to learn to hold the butt of my M-14 into my shoulder so it wouldn’t bruise me when it fired, and I had to learn to squeeze the trigger without flinching at the explosive bang when the primer ignited the propellant and shot the bullet through the barrel.  If you don’t anticipate that sudden bang, you’ll jerk the trigger and miss your target.  Learning to fire a real rifle expertly took hours of training and experience, and I became proficient with that weapon, too.

But no amount of training can prepare you for what happens in combat, which I experienced as a member of the 101st Airborne Division in Vietnam.  When the shooting starts, your adrenalin spikes and you are hyper alert, but initially you don’t know what’s going on.  Everything is chaotic, especially at night.  Unless you initiated the shooting, for a few moments you don’t know who’s firing or where the shots are coming from.  Getting your bearings is tough because you’re frightened—at the sudden noise, at the chaos around you, at the bullets flying around, and at the real prospect that you may not survive this.  Combat is frightening enough when your side is prevailing, but it’s incredibly worse when the enemy is—when guys around you are getting hit, when your lines being are overrun, and when explosions from rockets and grenades are added to rifle fire.  Being a good shot doesn’t matter much in the chaos of a firefight, especially with sudden, in-your-face, close-in fighting, because you don’t have time to aim your rifle, steady yourself, control your breathing, and squeeze the trigger.  No.  You put your rifle on automatic and spray bullets in the direction of the enemy hoping to kill or wound your adversary before he kills you.

Actual combat is mind-numbing and scary as hell.  Don’t let the Rambo’s or super heroes on the movie screen convince you otherwise.  Everyone is scared in combat unless they’re insane or numb to combat because they’ve experienced it too much (which is the same as being insane).

I’m writing this article after the Parkland, Florida shootings at the Majory Stoneman Douglas High School, where fourteen students and three teachers were killed by a troubled former student with an AR-15-type assault rifle.  President Trump said afterwards that if he had been at the scene he would have rushed into the school even if he didn’t have a weapon.  That bit of bravado was spoken like someone who’s never faced that situation and never been in combat.  Self-proclaimed heroes like Trump are absolutely and completely clueless. 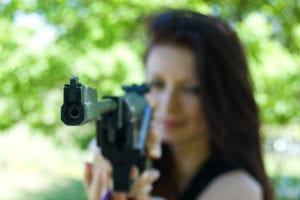 Trump also said that if some of the teachers there had been armed they would have “shot the hell out of that kid.”  Don’t bet on it, Donald.  There were armed deputies outside Stoneman, and they didn’t confront the gunman.  You think Mrs. Pratt, who teaches freshman English, is going to rush into a hallway Rambo-style and take out the bad guy?  Ain’t no way, hot shot.

Hardcore gun nuts believe that the solution to gun violence is to arm everyone.  One right-wing spokesman on CNN said that you never hear of bad guys shooting up pawn shops or biker bars because the patrons and operators of those places would shoot back.  Their solution to school gun violence is the same as Donald Trump’s:  arm the teachers.

Imagine a society where nearly everyone is packing.  A lunatic walks into a school or a mall or a movie theatre and starts shooting.  Then a half dozen people in the vicinity pull out their handguns and start firing at the shooter—or at the person they think started shooting first.  But when seven people are firing weapons, how will any of them know who was the original bad guy?  It’s as likely that some of those well-intentioned good Samaritans will shoot each other.  Moreover, with all those bullets flying around some innocent bystanders will be shot and killed.  In the chaos of armed conflict, well-intentioned people will not know what’s going on, will be bewildered and terrified, and are likely to make bad decisions that kill innocent people.

In the combat situations I experienced, I was working with men who were trained to fire weapons and knew what to expect when the shooting started.  But even in that circumstance the outcomes are not always what you expect.  After I rotated out of Vietnam, a captain in my unit who took my place leading ambush patrols was killed by one of his own men who mistook him for an enemy soldier in the dark of night.  In the fog of battle.  When even well-trained people make mistakes.  Friendly fire deaths happen routinely in wars—even though the combatants are all soldiers and presumably know what they’re doing.  Does anyone believe that mistakes wouldn’t happen in a high school when teachers start firing weapons and students are scrambling for safety through their classrooms and hallways?

You can’t be well-trained enough to always avoid accidents when the shooting starts.  In the chaos of a firefight, in the noise and confusion of a live shooter incident, it’s difficult enough to figure out what’s happening, to control your adrenalin and fear, to know which way to run, and to act responsibly with a firearm, especially if you’re not a professional—a soldier, a police officer, a SWAT team member, a Navy Seal.

Arming teachers is only a solution to people like Donald Trump and his NRA buddies who have cinematic fantasies of armed conflict and imagine Everyman and Everywoman are Rambo’s-in-waiting.  Recently, Republican Representative Ralph Norman from South Carolina held a town hall meeting in a diner and pulled out a loaded Smith & Wesson .38- caliber handgun while talking to constituents.  He explained himself by saying, “Given the scenario that if someone had walked into that diner and began to fire a weapon, I told them I would be able to defend myself and them as well.”  “I’m not going to be a Gabby Giffords,” he added.  No, Ralph, you certainly are not.  Nor are you Rambo. 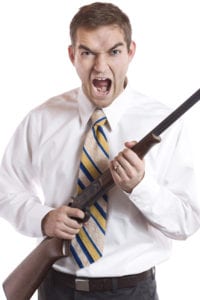 I know how to shoot.  I learned how in my bedroom shooting toy soldiers with a BB gun, and I re-learned it for real in Vietnam.  In firefights I was simultaneously confused, determined, terrified, anxious, excited, cowardly, and brave—all in the space of minutes that passed like hours—and I never want to do it again.  I want my grandchildren to be safe in their schools, and my wife safe at work, and myself safe at the movies, and all of us safe in our homes.  But if the price of that safety is arming everyone, if it means carrying a concealed weapon myself, if it means risking accidental death because some well-intentioned souls around me start firing at the presumed bad guy and hit me or my loved ones by mistake, then I’d rather pass.

Let’s do thorough background checks before someone can purchase a weapon, including at gun shows.  Let’s require gun safety courses for every gun owner.  Let’s prevent the troubled, the mentally ill, and the unstable from owning weapons.  Let’s outlaw bump stocks and high-capacity magazines.  Let’s require the police and FBI to investigate dangerous postings on social media.  Let’s prevent anyone under 21 from owning an assault rifle.  Let’s treat schools like the safe havens they should be and make sure they’re secure by controlling access and having well-trained security officers on duty.  Let’s end the insanity of living in a country where mass shootings are commonplace and children are murdered in their classrooms.  But let’s not arm Mrs. Pratt and her fellow teachers, Donald.  That’s not the solution.