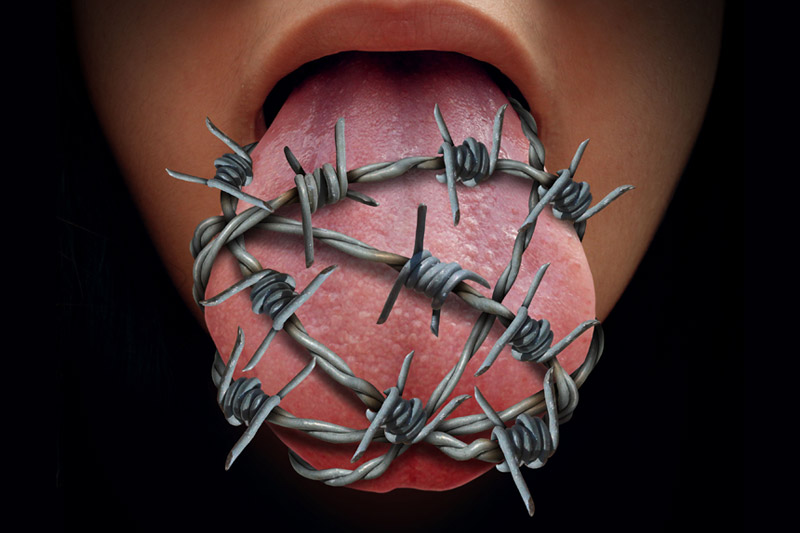 In 1978, a neo-Nazi group led by white supremacist Frank Collin planned a march through Skokie, Illinois, a suburb of Chicago in which more than sixteen percent of the population were Jewish Holocaust survivors.  Their plan met with widespread condemnation and the City of Skokie tried to prevent the Nazis from marching.  In a highly controversial move, the American Civil Liberties Union (ACLU) sided with the Nazis, arguing that they had a First Amendment right to freedom of speech and freedom of assembly.  In the legal fight that followed, the Illinois Supreme Court, the United States Court of Appeals, and the United States Supreme Court agreed that Skokie could not prevent the Nazis from marching, that doing so would violate their First Amendment rights.

More recently, white nationalist Richard Spencer was denied permission to speak at Ohio State University and Penn State University, and his attempt to speak at the University of Florida was disrupted by demonstrators protesting his racist views.  In April 2017, conservative provocateur Ann Coulter had a planned speech cancelled at the University of California-Berkeley when the campus became concerned by public safety.  As Berkeley Chancellor Nicholas Dirks explained, “This is a university, not a battlefield.  We must make every effort to hold events at a time and location that maximizes the changes that First Amendment rights can be successfully exercised and that community members can be protected.  While our commitment to freedom of speech and expression remains absolute, we have an obligation to heed our police department’s assessment of how best to hold safe and successful events.”

Coulter used the occasion to skewer the left:  “It’s sickening when a radical thuggish institution like Berkeley can so easily snuff out the cherished American right to free speech.”  Similarly, when protesters disrupted Richard Spencer’s speech at the University of Florida, he shouted, “You are trying to stifle our free speech.”  Spencer, president of the National Policy Institute, an alt-right think tank that promotes white supremacy, supports President Trump and has argued for a separate all-white nation.

Radical conservatives like Spencer and Coulter have a keen grasp of marketing and know that their radical, racist views will spark protests, which will draw media attention, and will build their brands, give them the attention they seek, and help them sell more books and generate more contributions to them and their causes.  Do they care if their events are cancelled or disrupted by protesters?  The jaundiced view says no.  They get what they want just by causing public controversy.

Are their free speech rights really being violated?  That’s an interesting question.

Freedom of Speech—and Its Limitations

In America, the Constitution guarantees us the right to freedom of speech.  However, that right is not without some limitations.  Freedom of speech allows you to voice your opinions. It gives you the right to burn the American flag (symbolic free speech) in protest and to kneel during the national anthem (yes, former pro quarterback Colin Kaepernick is allowed take a knee).  If you’re a student, it allows you to wear black armbands to protest a war.

However, you can’t say something that would harm others (like shouting “fire” in a crowded theater) and you can’t create or distribute obscene materials.  If you’re a student, you can’t make an obscene speech at a school event, advocate the use of illegal drugs at those events, or, if you go to a private school, print articles in a student newspaper the administration does not approve of.  However, public school publications have more free speech protection.

When you belong to an organization, your free speech rights depend on whether your organization is public or private.  Within reason, companies can prohibit what their employees say.  You could be fired, for instance, if you worked for a beauty salon and openly called a customer ugly or if you used racial slurs.  Google did not violate a male engineer’s free speech rights when it fired him for writing that women were not biologically fit for roles in technology.

Public institutions like schools, police departments, and government agencies cannot restrict an employee’s free speech rights unless they determine that an employee’s remarks impact their ability to do their jobs.  The FBI agent on Robert Mueller’s staff who wrote in an email that President Trump is an idiot was exercising his free speech rights; however, Mueller removed the agent from his staff because the remark may have impacted his impartiality in investigating the Russia connection to the Trump campaign.  But could that agent be fired from his job for making that remark?  Probably not, although you could argue that it showed a lack of judgment and professionalism.

Social media platforms like Facebook, Twitter, Pinterest, and Instagram are private organizations, so they can legally curtail what their members post online, and they can bar individuals from being members if those individuals violate the platform’s policies or decency guidelines.  Freedom of speech allows you to speak your mind, but it doesn’t guarantee you a public pulpit like Facebook.  And bigots like Richard Spencer are allowed to voice their racist and inflammatory views as long as they don’t advocate or incite violence or harm to others.  However, that doesn’t mean you have to listen to them.  Often, the best response to someone who’s saying something you don’t agree with is to ignore them, and to exercise your right to disagree.

In 1994 controversial political scientist Charles Murray published a book entitled The Bell Curve in which he argued that African Americans, Latinos, women, and the poor are genetically inferior to white males.  His arguments have been thoroughly debunked, but he clings to his beliefs and occasionally appears on college campuses to promote his views.  In March 2017, he appeared at Middlebury College in Vermont and was met with strong student opposition.  Protesting his ideas, between 100 to 150 students shouted down Murray and would not let him speak.  When he moved to another room, students pulled fire alarms, and several masked protestors attacked Murray when he left the building and injured faculty interviewer Allison Stanger, who is a liberal.  She had prepared tough questions for Murray but was never able to ask them.

The Murray-Middlebury incident illustrates a disturbing pattern on campuses.  While saying they espouse freedom of speech, liberal students on many campuses try to shut down speakers whose views they disagree with, which is precisely contrary to free speech.  Some universities have created “safe spaces,” where students can go and not be exposed to ideas that would offend them, and faculty members are asked to give “trigger warnings” if they’re about to say something in class that might upset students.

Steps like these take political correctness to an absurd extreme.  College campuses should be venues where a robust exchange of ideas and viewpoints is encouraged and where people with contrary views can speak without fear of violence or recrimination.  Sixty-seven students at Middlebury College were sanctioned for their behavior but none were expelled or suspended.

No matter which side of the ideological divide you’re on, freedom of speech means that people with views opposite your own should nonetheless be allowed to speak.  You don’t have to agree with them.  You can question their views.  You can offer evidence that contradicts them.  Or you can conclude that they are fools and just ignore them.  But to shout them down and not allow them to speak is a violation of their right to free speech.

We are currently going through a crisis on campuses where liberal students don’t want to hear ideas that conflict with their own.  The ideas that Ann Coulter, Richard Spencer, and Charles Murray espouse are repugnant and often offensive, but in America they have right to express their views, and the students or authorities who try to prevent them from speaking are wrong.