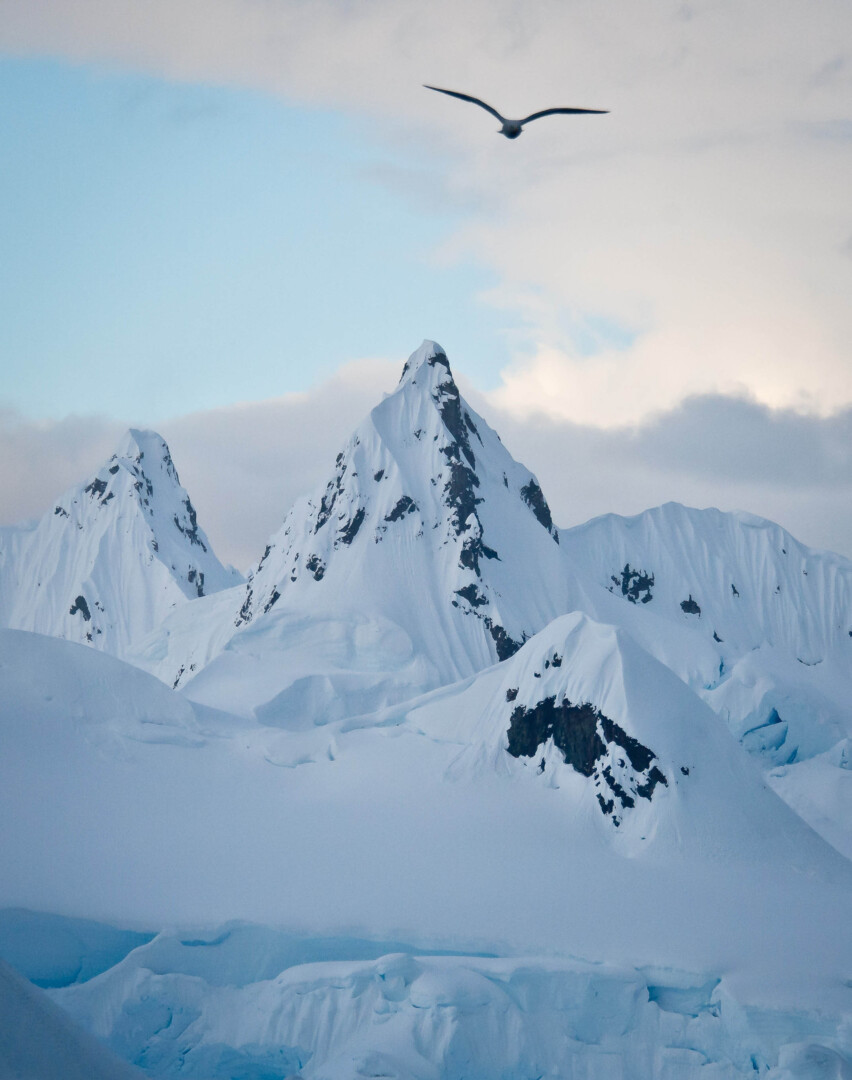 During our recent exploration of Antarctica, we met Colby Munger, a talented photographer who took these breathtaking photographs of icebergs and glaciers.  No photograph can capture the epic scale and magnificent beauty of Antarctica that one sees in person, but these photos come close.  You only have to imagine these images as a 360-degree panorama and feel the biting cold on your cheeks as dark clouds, floating across the sky, bring subtle changes in light and shadow across the snowfields and mountains, and as the sea rocks you gently or not-so-gently in its vast expense of deep blue water.  Antarctica is an empire of ice like no other.  Enjoy this photographic journey.

The photographer captures the bleak beauty of Antarctica in black & white.  Rugged mountains rise from the sea, part of the Andes chain extending from South America.  Sheer cliffs pose a forbidding barrier along much of the coast.  Beyond them are centuries-old ice fields hundreds of feet deep, the ice compressed into glaciers that slog their way to the sea where the leading edges will calve to form icebergs.  Antarctica is the highest and driest continent on Earth—and the least inhabited.  It is likely that humans have never explored this mountain range but for small areas of the coast where bays allow safe landings.  Excursions onto the glaciers would be treacherous and the weather forbidding. 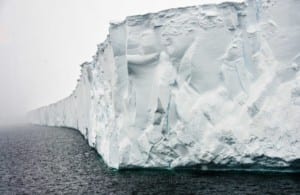 This massive tabular iceberg extends so far to the left that it fades into the mist. Tabular icebergs are so named because they’re like tables.  They are formed when a thick sheet of glacial ice extends far into the sea.  The greater part of it still sits on land, but the part extending into the sea floats on less-dense water, and eventually the glacial sheet weakens because of differences in stress between the water-borne and land-borne portions of the glacier.  Cracks and crevices form and the sheet eventually shears free.  Tabular icebergs can be unbelievably large.  Our ship passed one that was ten miles long.   This tabular iceberg is impressive enough given its size, but it’s even more impressive when you consider that 90 percent of the iceberg’s volume and mass is underwater. 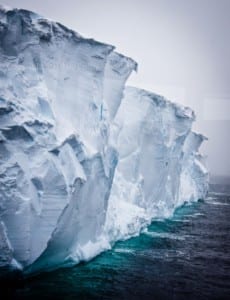 This color photo of a tabular iceberg shows the blue of the ice below the waterline—as well as some hints of blue ice on the sides of the iceberg.  Blue ice is formed when the ice is compressed by repeated snowfalls over centuries.  The added weight of snow compresses the ice so much that the ice absorbs the red end of the spectrum.  Undersea ice near the surface also reflects the bluish-green hue of the water.  The effect can be dramatic.  Most icebergs have an almost florescent blue ring around and beneath them, extending ten or more feet below the surface until the blue is no longer visible in deeper water.  Scientists say that the lifespan of icebergs—from first snowfall to eventual melting can be as long as 3,000 years.  Deep ice in Antarctica’s interior is more than a million years old. 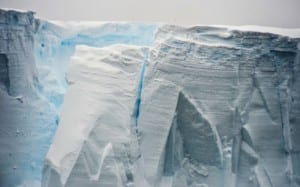 This split-open glacier on the Antarctic Peninsula is in the process of calving, a process that may not completed for hundreds of years. The wall of ice on the right looks like a sedimentary rock formation—thin layers of ice laid over each other like layers of sand in sandstone.  If this were a painting, we’d imagine the artist slathering on layers of paint with a trowel, the rents, gouges, and cuts evidence of a heavy hand moving quickly.  The interior of the glacier—where the chasm has appeared and is growing wider—looks like it is lit from within, blue light washing over the back and side walls and escaping through the crevice in the center of the frame and less so in the narrow crevice on the right.  Glacial formations like this have an eerie, other-worldly beauty. 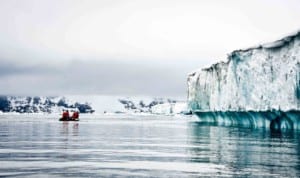 Visitors in their orange parkas explore an expansive Antarctic bay ringed by mountains and glaciers. We rode close to the icy water in rubber Zodiac boats, sometimes in calm water as shown here and sometimes in five-foot waves with fierce wind chilling any body parts protected by fewer than four layers of clothing.  Dark clouds hang low over the mountains beyond portending the snow that would soon fall.  On the right, a glacier jutting from the coast is windswept and scarred, pummeled by centuries of harsh weather.  Snow caps hang over its top like icing on a cake, while its blue skirt has retreated like the gums in an old man’s mouth, having been lashed and carved by wind and stormy seas.  Antarctica is epic in its scope and grandeur, reminding us that it is large and we are so very small. 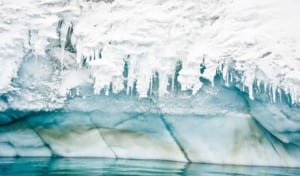 This close-up of the side of an iceberg is an interesting study in contrasts. The foundation of the iceberg is a relatively smooth blend of blue, white, and brown shades crisscrossed by diagonal fault lines.  Above it, lapping down from the top of the berg is a splattering of white ice like cake frosting carelessly applied.  Icicles dangle from the splotches of white ice, some sharp and some rounded from repeated periods of freezing and melting caused by solar warmth.

The rugged chops of a blue glacier make a formidable barrier on the edge of this Antarctic mountain range. Younger white snow drapes over the top of the blue ice like a blanket, while at the foot of the glacier the sea reflects the florescent blue of the glacier’s subsurface ice.  The white snowfields beyond the glacier are hundreds of feet thick, their weight slowly pushing the ice toward the sea.  The snowfields are white because their top layer consists of new snow, but the ice far beneath is blue from of the crushing weight of all the ice and snow above it.  This blue glacier will eventually calve into the sea as the dense ice behind it pushes inexorably forward. 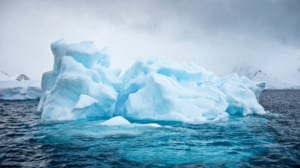 Bergy bits are floating chunks of ice that rise three to thirteen feet above the water.  This bergy bit looks like a blue sponge, its surface having been eaten away by wind, waves, and warmer days.  Its contours, holes, and channels show the cumulative effect of erosion by waves during rougher seas while its soft edges are evidence of melting that occurs on days when solar heating is powerful enough to tame its sharp edges.  It floats on a deep bed of ice that is also cotton-candy blue, but the blue iridescence in the water is largely a reflection of the bergy bit’s surface charm.  We’ve seen sandstone formations as intricately carved as this bergy bit—and accomplished by the same forces.  This photo reminds us, as Aristotle said, that “art takes nature as its model.” 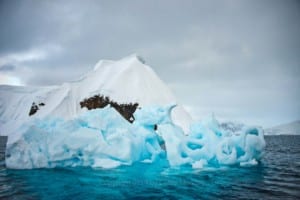 Here is another blue bergy bit, this one so honeycombed it has separated in the center of the frame.  It seems held together by delicate arches and bridges, the whole tenuous skeleton so rickety that its skeletal structure may collapse in the next restless sea.  Behind it is a stalwart black mountain covered with snow and ice, a formidable white bastion that has stood for ages.  It seems to have a white citadel on top guarding the entrance to the bay.  This photo is a study in contrasts:  the firm and the frail, the enduring and the ephemeral, the indomitable and the insignificant. 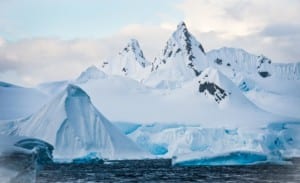 Antarctica remains the most pristine continent on Earth—untamed and unclaimed. It is governed by the Antarctic Treaty (1959), which was signed by twelve nations and has since been acceded to by many others.  Its purpose is to ensure “in the interest of all mankind that Antarctica shall continue for ever to be used exclusively for peaceful purposes and shall not become the scene or object of international discord.”  The five snow-covered peaks in this photo, and the long snowy ridge behind them, are a testament to nature’s ability to craft landscapes that will likely never be conquered.  We can be thankful that such astounding beauty exists beyond any nation’s or person’s capacity for careless treatment of a global treasure or any ruler’s jealous desire for personal aggrandizement through conquest. 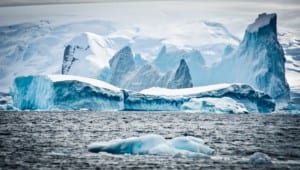 In this magnificent photo, Antarctica, an Empire of Ice, is on full display. In the foreground is a growler, a chunk of floating ice no more than three feet above the water.  It’s known as a growler because as air is released it makes a sound like an animal growling.  In the middle ground, to the right, is a bergy bit, floating ice between three to thirteen feet high above the water.  Behind it is a long and low iceberg with gouged, rotting blue cliffs and a snow-white cap.  Behind it is a majestic iceberg formation we called The Cathedral:  a towering throne on the right and sheer blue-white walls forming an enclosure that resembles a box canyon.  And behind it all a massive snow- and ice-covered mountain range extending as far as we could see.  This was Antarctica at its most spectacular.  You could stare at this vista for hours, feeling blessed to be in the presence of such astonishing natural beauty. 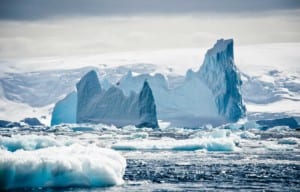 Here, Munger captured another perspective of The Cathedral.  It sat on a massive, oval blue disk of ice that extended hundreds of feet below the water line.  Inside the Cathedral was a white carpet of snow and ice where worshippers might gather.  The blue-white walls forming the enclosure were impossibly thin.  It was difficult to imagine how this natural ice sculpture could have been formed.  What forces hollowed it out and crafted those slender blue cliffs in a semicircle?  It was as though the hand of God had reached down to shave the ice into this remarkable formation.  Whatever its origin, we saw no other ice sculptures as glorious and breathtaking as this one.

Colby Munger is a passionate amateur photographer who is a retired naval officer, engineer, and inventor.  He travels the world with his wife, Linda, in search of inspired moments of awe with the

people and places of world and on some lucky occasions captures in a small way the emotions of those experiences in photographs.  He bought his first camera, a 35-mm SLR, and tripod as a sophomore in high school.  His family lived on Treasure Island in the middle of the San Francisco Bay Bridge, and it was a perfect place to photograph the changing moods of the San Francisco skyline.

Today, he shoots with a Nikon D4 camera and a Nikon 28-300mm lens.  The D4 is an outstanding multi-purpose camera with 16.2 megapixels, an EXPEED3 image processor, and 100-12,800 ISO.  Colby says he rarely uses other lenses and, in fact, has “a lot of pro glass in different sizes collecting dust in the attic.”

On this journey, Colby was often shooting landscapes, but he says that whatever is around him is his favorite subject.  “If there is gesture and the moment caught is evocative–that is a great subject.  It could be a bird, a flower, a mountain, a smiling child, or a sad street scene.  Wherever we are there is beauty, vulnerability, awe, and pathos–all these are my favorite subjects.”