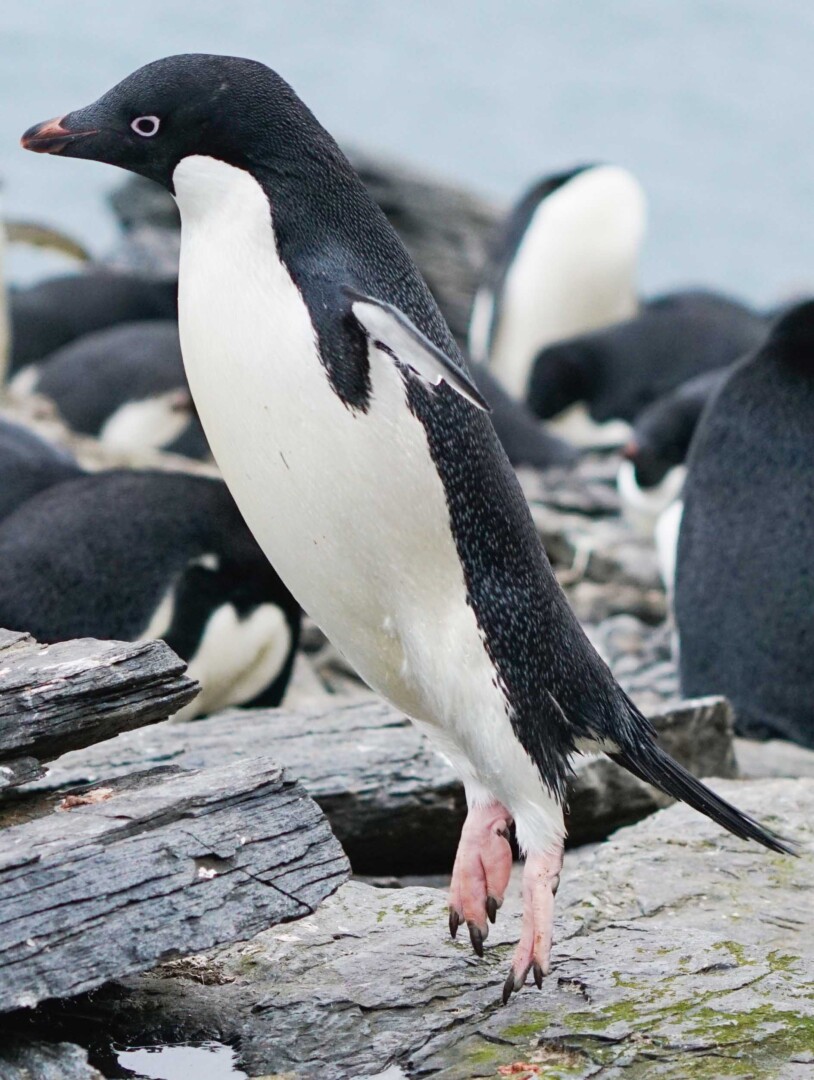 Photographer Michael Wooters, whom I met during a three-week excursion to Antarctica aboard the National Geographic Explorer, is a full-time financial advisor with Edward Jones and an avid photographer and world traveler during his “off-hours.”  Wooters took thousands of photos during the trip, capturing sea birds, seals, whales, and a variety of penguins, as well as beautiful shots of the Antarctic and South Atlantic land and seascapes.  This photo journey presents a collection of his photos of penguins.

It is likely that this king penguin standing in the water off South Georgia Island was peering into the water looking for an easy meal, some krill, perhaps, or a small fish.  But it’s tempting to anthropomorphize and imagine the penguin looking at its own reflection—a bird, like the Greek lad Narcissus, contemplating its own image.  Would it be curious about the bird looking back?  Or would the scattered reflection in the rippling water create some angst.  Am I coming apart, it might be thinking?  Or Is this how others see me?  Scientists would scoff at this literary conceit, but they would probably agree that what the photographer has captured is a beautiful reflection of nature.

The adult penguins have returned to the beach, and a lone oakum boy stands crying for its mother or father.  Until they mature, these brown-feathered youngsters rely on their parents to feed them.  They are called “oakum boys” because their brown plumage resembles oakum, a tarred fiber used to caulk wooden ships.   The sailors who first came to South Georgia in wooden sailing ships thus named these goofy looking creatures.  We think they resemble teenagers in the Roaring Twenties wearing raccoon coats.  As they waddle quickly along, their hips twisting comically, they look like they’re doing the jitterbug.

Two Adélies sit on their nests, keeping their eggs warm, while a smart aleck perched on a rock beside them prepares to leap.  Watching the antics of penguins in their colonies is an entertaining pastime for visitors to the Antarctic.  No doubt, the leaping Adélie was just trying to get from one place to another.  They don’t know how silly they look.  The Adélies nest on a bed of small rocks, and one of their frequent activities is stealing each other’s rocks.  Most of the time, they try to be surreptitious about it, but this leaping Adélie may have been causing a distraction while an unseen partner crept up and stole a pebble.  Or the leaper may just have been enjoying a moment of free flight.  Penguins can’t fly, but deep in their brains may be an ancient memory of a time when their ancestors could.

“Look!  Up in the sky!  It’s a bird!  It’s a plane!  It’s . . . superman!”  Here, Wooters captured a rare moment when five penguins were doing the same thing at once.  Penguin life is normally much more uncoordinated and chaotic.  Either these five were transfixed by something overhead, or they were caroling simultaneously, like a penguin choir.  Large colonies of penguins are perpetually noisy as they purr, clack, and warble at each other—like people in a large, busy restaurant.  To the question, What kinds of penguins are there?  One answer is that there are white penguins and black penguins.  They’re white if they’re coming toward you and black if they’re moving away.

An Adélie sitting on her eggs watches warily as two Snowy Sheathbills walk close by—too close for her comfort.  The Sheathbills will steal her eggs if they can.  Like Skuas, another Antarctic bird, sheathbills forage among penguin colonies, making away with eggs or small chicks when the parent penguin is distracted, or stealing food dropped when parent penguins are regurgitating food for their chicks.  These two sheathbills are trying to be nonchalant.  “Don’t mind us,” their casual pose seems to convey.  “We’re just taking a Sunday stroll.”  But the Adélie doesn’t believe it—nor should she.  In this game of cat-and-mouse stealth and vigilance are the keys to success for the Sheathbills or survival for the Adélie’s offspring.

It’s tempting to see more leadership and organization in this gathering of Adélie penguins than is actually present.  These penguins sing to their own tunes and likely follow whoever moves first.  Still, the Adélie whose back is to us seems to be taking charge, leading the penguin equivalent of a barbershop quartet or giving the somewhat distracted group a few pointers on finding the best fishing spots or perhaps cleaning and grooming their chest feathers.  He’s pointing toward the two penguins on his left, who have nice clean white coats, whereas those on his other side are slackers, including the epic grass-stain failure of the penguin in front of him.  “Shape up, guys,” he might be telling them.  “You’re never going to attract a mate with dirty coats like those.”

This is a great shot of a Rockhopper Penguin face on.  With their spiky black feathers on their head, blonde accents above their eyes and on either side of their head, and those deep red eyes and orange beaks, Rockhoppers are the punks of the Antarctic Convergence.  This one resembles the Robert DeNiro character in Taxi Driver.  You can’t look at them without smiling, their appearance is so comical.  These birds are the smallest of the Antarctic penguins.  They breed on rocky ground, scree slopes, lava fields, and rocky shores, and often intermingle their nests with those of albatrosses.  Rockhoppers are notorious  pebble thieves and are eclectic in their thievery.  They will steal from other Rockhoppers as well as other species in order to “feather” their own nests, so the speak.  The females lay two eggs, one smaller than the other.   The larger egg usually hatches, but the smaller one typically does not.

These five hooligans look like they’re stepping out on a Saturday night looking for trouble.  When Rockhoppers walk, they sometimes scrunch their heads down and skulk forward, like the little guy at the head of this pack.  He looks like major bad attitude.  It’s easy to project human qualities onto animals when the animals are hilarious.  Rockhoppers are the most widespread of all the South Atlantic penguin species.  The photographer discovered these five on The Falkland Islands, where they were walking on a field of low grass.  The grass on South Georgia Island is mainly tussock, a type of grass that grows in large clumps or tufts.  Grass does not grow in Antarctica.  So the type of grass they’re walking on tells us that these penguins live on the Falklands.  If you’re ever there and happen upon these five Rockhoppers, watch out.  They’re up to no good.

This is a typical Adélie Penguin colony on the slope of a mountain in Antarctica.  The penguins nest on the ice between large boulders and rock outcrops.  They congregate (lower right) near a ledge above the sea, waiting for the bravest of them to take the plunge.  Above them, some sit on their nests while others waddle about in seemingly random motion.  On the open white slope in the top middle some penguins make their way uphill and occasionally, one plops onto its belly and slides down.  Penguin colonies like this one are a riot of motion accompanied by a cacophonous din of chirps, squawks, and caws.  Very likely, a leopard seal or two lurk in the waters just off-shore waiting for penguins to enter the water or return to the colony from feeding in the ocean.  Individual Adélies are no match for the leopard seals; their best defense is in their numbers.

Here, the photographer captured the moment when an Adélie Penguin lept from the sea onto a bergy bit (floating ice that is between 3 to 13 feet high above the water).  Adélies can leap as much as six feet out of the water.  They normally swim around five mph but can accelerate five or six times that speed for short distances (if they’re trying to evade a leopard seal, for instance).  In the water, they can reshape their bodies according to how fast they need to swim.  While feeding, Adélies typically stay submerged for two to three minutes and dive 150 feet to find fish, krill, or small squid.  Occasionally, they’ll dive 400 feet (the deepest recorded Adélie dive is nearly 560 feet).  This bergy bit is a temporary resting spot for these four Adélies.  They may have spotted a leopard seal in the area or they may be conserving their energy before continuing to feed or returning to their colony.

This photo captures the vast expense of the ice and the bleakness of parts of Antarctica.  These penguins are moving along fast ice, so called because it is “held fast” to the shore.  Pack ice, seen in the lower right, is ice that has broken away from fast ice or a glacier and is floating in a large mass.  Seven of the penguins shown here are tobogganing—sliding across the ice on their bellies, propelled by their wings and feet.  Walking is cumbersome for penguins because their short, thick legs and webbed feet are designed for swimming, not walking.  While walking, penguins can reach about two mph; they may reach six mph while tobogganing.  However, tobogganing is hard on their belly feathers, so they must preen them more often to keep those feathers in peak condition.

This shot of a King Penguin on South Georgia Island captures the beauty of the bird’s unique coloration.  It has a silver-gray back and a white front demarked by a crisp black border.  On either side of its ebony black head are tadpole-shaped orange spots that seem to bleed down to the orange fan on the front of its neck and upper chest.  An accent of orange on either side of its bill points toward its black, slightly downturned beak.  King penguins average about three feet in height; their taller cousins, the Emperor Penguin, average closer to four feet.  In prehistoric times, some penguin species were closer to five feet high.  King Penguins are abundant throughout the Antarctic Convergence, and 1.6 million of them are now found on South Georgia Island.  They have no crown but carry themselves regally, as shown here. 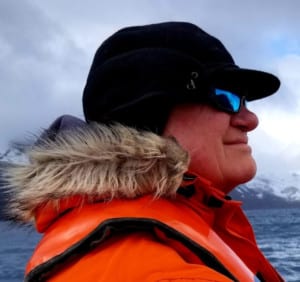 Michael Wooters became serious about photography in 1999 while preparing for a safari in Kenya.  His first camera was a Canon SLR.  Today, he uses a Sony 7RII, which is a mirrorless, full-frame, high ISO (102,400), 42.4 megapixel camera, ideal for live action photography.  He primarily shoots with a Sony FE 24-240 mm f3.5-6.3 10x zoom lens and, for longer shots, a Sony FE 100-400mm f4.5-5.6 GM lens.  Both lens are noted for high resolution and sharpness and have Sony’s Optical SteadyShot image stabilization system for taking action shots without a tripod.

You can see more of Michael’s photography at michaelwootersphotography.com.  He may be reached at photopapawooters@gmail.com or (503) 551-7121.